Antalya a City of Breathtaking History 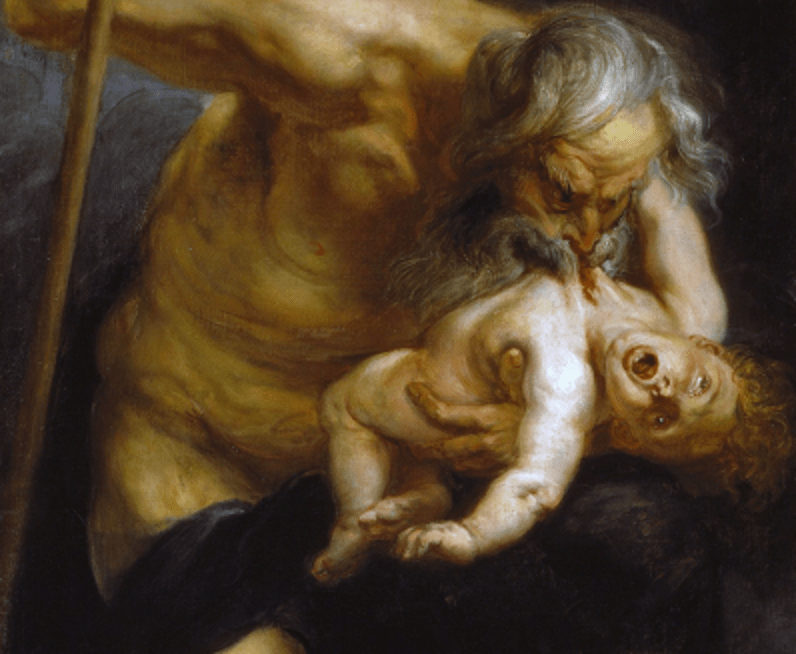 According to the myth, at the beginning, there was only dark and chaos. From this chaos (Khaos), earth (Gaia) was created. Gaia was a strong Goddess, she could give life and take. She created Uranus (sky), they had many children: titans, titans had Cyclops, and Gaia gave birth to giants. However Uranus was afraid, afraid of his own children will take his place, so he killed each and buried underground. Gaia was sad, she kept burying her children in her chest. There was no way to stop Uranus, but she was wishing to keep Cronus (time). So she made a plan and mother earth had Cronus kill Uranus in his sleep. So the time beat everything as it would do. However, he was mean as his father, he inherited the worst: he was afraid that his child would take his place. So he ate every child that he had with Rhea. 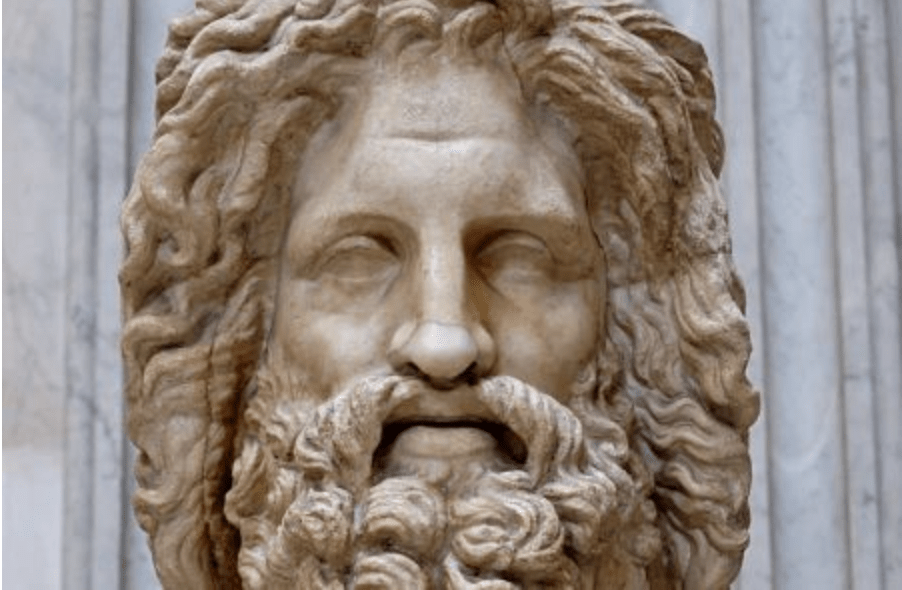 Zeus: The King of Gods

Rhea was sharing the same story as Gaia, so she made a plan. She didn’t want her last born baby to be dead, so she wrapped a stone and gave it to Cronus instead. The last child that was born was no other but Zeus, so she hid him in the Crete island. Cronus had no doubt and he ate the stone, thought he was going to rule forever. Zeus was growing old and strong however, and one day he beat his father and saved his sisters and brothers. He sent Cronus to the depth of the earth, where he could not survive. Now Zeus was the ruler and he created Olympos (Olympus) so the gods and goddesses can live. There was no more chaos, but order and peace. 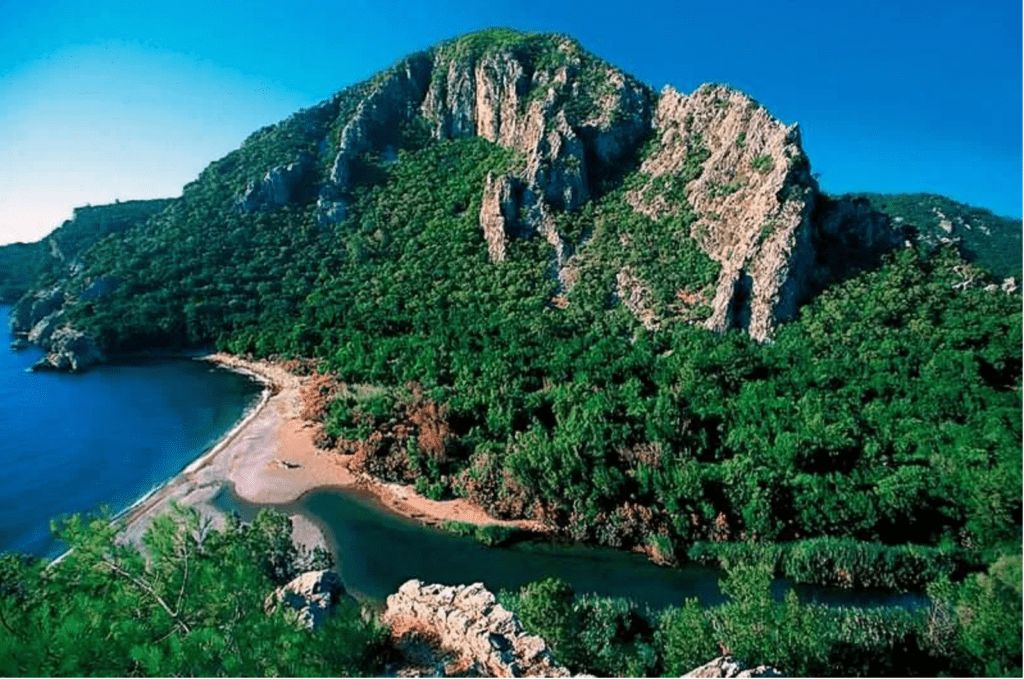 The legend goes on, but belief is that the creation of the mount Olympus was like the story tells. There is also ancient city Olympos, it was one of the most important cities of Lycian Civilization. They have the first democratic order known in history. It had 23 cities, with 6 important and big ones: Arnna (Ksantos), Patara, Pinara, Tlos, Myra and Olympos. 6 big cities had 3 votes each and other cities had 1 or 2 vote. This federation system is considered as a kind of foundation of today’s American law. Lycian Civilization was also famous for its ports and trade route as you all know. Also there is the story of Lycian king. The myth is that once there was monster called Chimera (lion, goat and snake) which devastated Caria and Lycia. Fire would came from her mouth. The king sent the young Bellerophon to kill Chimera. Bellerophon becomes successful with his winged horse, Pegasus. He sticks his spear into the beast and buries it seven times below ground. It is believed that Chimera continues to fire from this day. Today the place where it is believed that Chimera is buried under is called “Yanartaş” (The Flaming Rocks of Yanartaş). 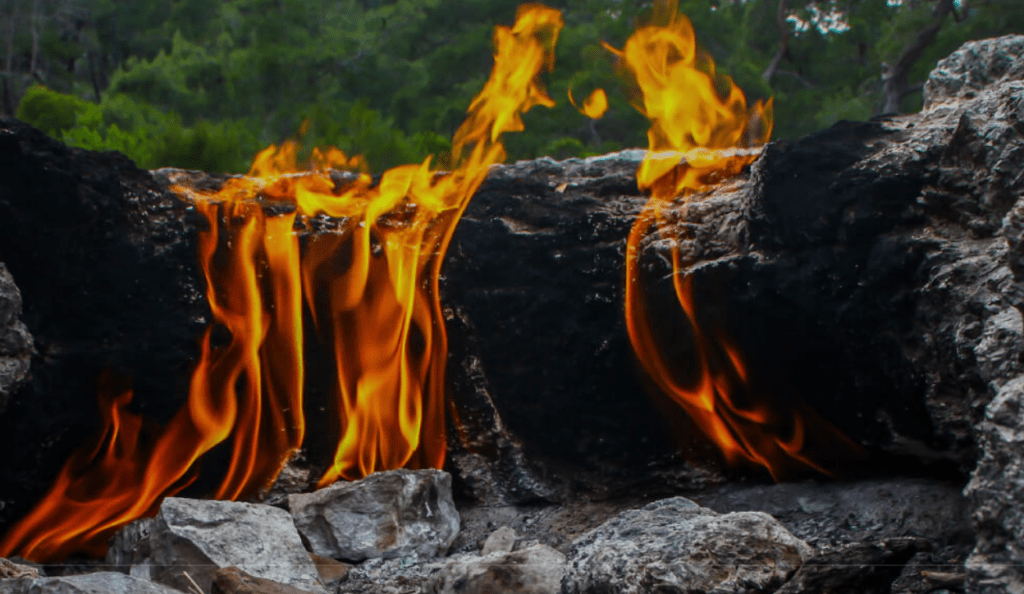 Near this place, there was also a region called Pamphylian. An important city was in this region. This city was called Aspendos. It was on an important trade route and connected to the port by the Köprüçay River, therefore it was among the cities that were wanted to be captured in every age. One of the most important buildings in Aspendos is the ancient theater. Its construction was started in the time of Antonius Pius and completed in the time of Marcus Aurelius (138-164). This open-air theater, which has survived to the present day, also has its own story. 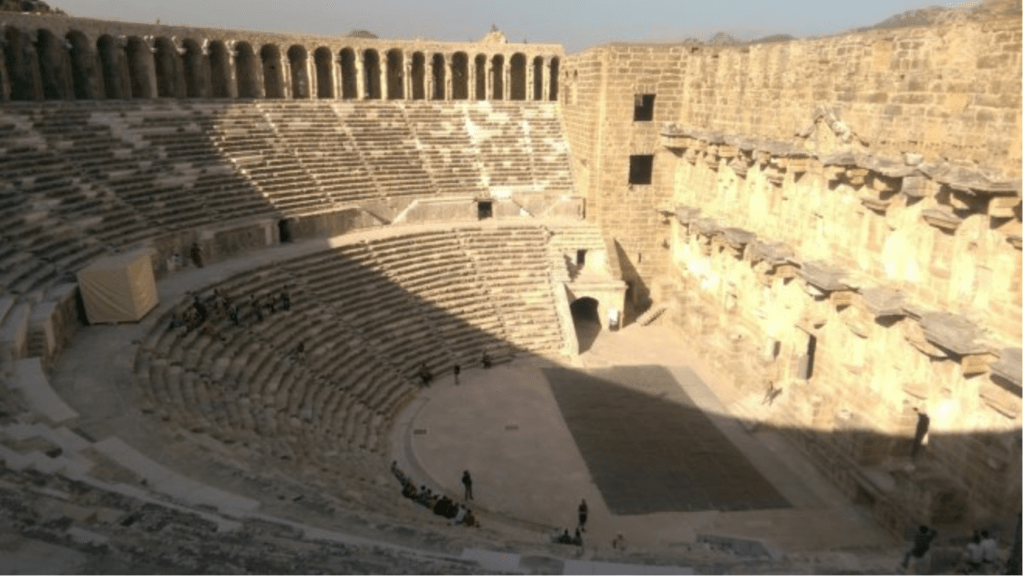 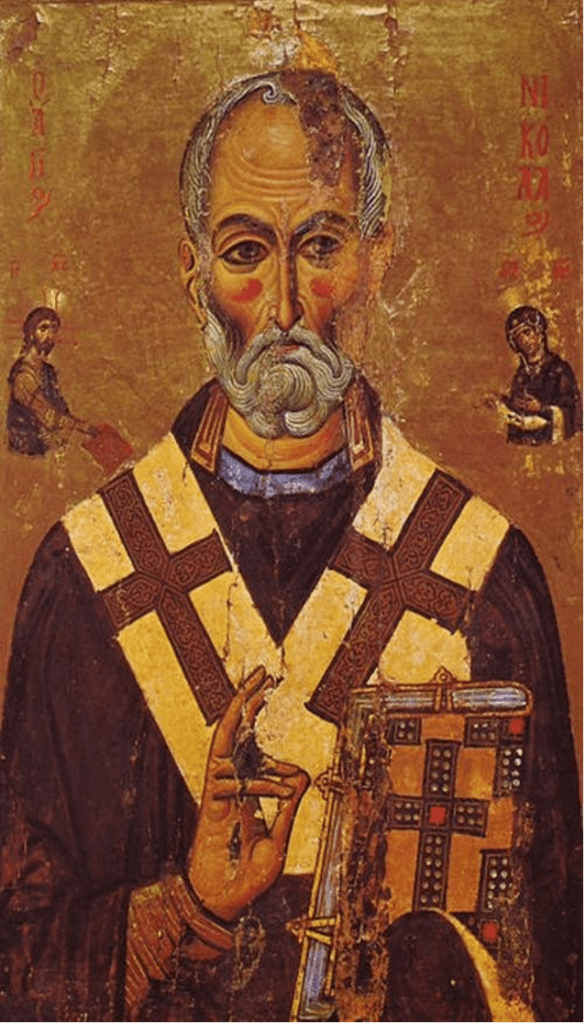 In this place, which we started to tell from an ancient Greek mythology, another miracle took place. A saint, who was born in a city named Patara in the Lycian Civilization and is believed to give gifts, is none other than Santa Claus. Santa Claus or Saint Nicholas is thought to be born in Patara and after visiting Palestine and Egypt in his youth, he returned to Lycia and is said to be the Bishop of Myra. He was famous for his good-heartedness and generosity. A church was built in the ancient Myra after his dead in 6th century.

If you want to leave the darkness of pandemic behind and leave these difficult times behind in a pleasant way, just like Zeus defeating Cronus (time), after a long time, and get lost in miracles, M2R is the right place and time. Moreover, in this seaside city on the Mediterranean coast, where miracles take place and rich in history and culture: Antalya.

●          M2R has package names from mythology and these historical places. Could you tell us about the packages?

Early bird is already sold out but let me tell you about 1st wave packages. Let’s take a look at the package tours named after the cities mentioned above: If you want to stay and want an all-inclusive (accommodation, entrance fee for the Antalya museum, beach activities, boat tour, city tour, lunch and gala) program, the 3-night 4-day Myra program is for you. Its price is 279 Euros. For those who can stay 2 nights and 3 days, the Olympos program, which includes a boat tour, lunch and gala, including accommodation is 229 euros. For those who can only stay for 1 night and 2 days, the Aspendos package, including lunch, gala and accommodation, is available, which costs 189 euros. If you say that I will participate in everything but I will arrange my accommodation by myself, the Likya program is for you and only 69 euros. Of course, Patara package is available for those who can only come to the gala, it is 49 euros. But I would like to remind you that the entrance fee for the parties are not included.

We may think of the pre-M2R as the warm up to the M2R. As the M2R 2021 Antalya HOC team, we have prepared activities that will get us closer so that all the attendants are going to have more fun on M2R. To give more details, we are going to take you all to one of the most beautiful places in Antalya which is the Göynük Canyon. After we take a tour there, we will have 3 options; Ziplining, ATV safari and rafting. Secondly, as we mentioned since the beginning of the organization, in many agesi many cultures touched these lands and we are going to discover only a few since we do not have enough time for it. This being said, in pre-M2R, we will take you to the ancient city of Phaselis founded by the Rhodesians in the 7th century. The city has been the most important port of the eastern coast of Lycia for many years. Of course, no need to mention the fun activities in between we are going to have in the 5 stars all inclusive hotel in Kemer, Antalya.

•           What miracles await us during M2R? We have been intertwined with the pandemic for a long time, what will we do in this beautiful organization?

In the program that will last for 4 days, there will be an opening ceremony after the welcome on the first day. Then we’ll continue with country booths. After a nice dinner, we will close the day with ice breaking activities. On the second day, after breakfast, a beautiful boat tour awaits us in the Mediterranean. Afterwards, a good dinner and of course the party. On the 3rd day, there will be a board-cr meeting after breakfast. Then the community project will take place. Then we will have some free time, it is possible to visit the places you want to visit during this free time. But don’t miss the evening! Because the gala and after party are waiting for us! On the last day, checkout will take place after breakfast.

We preferred a city hotel for the accommodation to have more flexibility on the M2R program. As we welcome our guests, the city tour will start with the ancient tram. The plan is to join all the guests who have different flights at some point. The program includes the city tour, a boat tour that will cover some of the most beautiful coast in Antalya, a community project reflecting our love of the Mediterranean and of course; sea, sun and beach. We ensure that after night, even if you feel tired, you will feel that more energy is needed for the after hour activities.

Actually, the HOC team does not think that you will have time besides these activities since we covered every single time slot. Nevertheless, we are aware that some of the participants may want to spend time separately. We are preparing some alternatives to give opportunities as they are being announced in our social media pages.

Turkey is indeed very famous for its cuisine and it is impossible to be introduced because of the variety of the choices. Still, we are planning that we will give the opportunity for many tastes which are common such as Piyaz, Shish Kebab, Pumpkin Dessert, Baklava, and many foods will be covered in our social media pages. You may want to try meatballs on skewers, haricot bean salad and nut pumpkin with tahini at Şişçi İbo. For regional couisine, we recommend 7 Mehmet. If you’re a wine and meat lover, you may want to go to Hasan Antalya Restaurant. For döner, we recommend Arum Diner or Dönerci Hamdi Usta. If you want to taste burnt ice cream, then you can go to Akdeniz Dondurma or Konak Dondurma.

●          Some of us will stay a little longer. Which other cities would you recommend for those who would not be content with Antalya and would like to witness the magic and other miracles of Anatolia?

The HOC team will be happy to give suggestions and guidance for the post days of the organizations. The answer is the same; we are sharing many places to visit besides Antalya giving the hours to be spent on the road and the history. We strongly suggest our participants buy their return home flights from Istanbul, which is the most well known city in Turkey given its history, and entertainment options. For more information, follow us on Facebook and Instagram !

Now is the time to continue the legacy of the saint born in this land and give yourself a nice gift: Join M2R and be a part of this beautiful organization, have a pleasant holiday and spend good times with your Rotaract friends.

Special thanks to Alia Triki (Med Times Editor in Chief), Çağla Ekiz (Past DRR of Dist.2430) and Can Bahadır (Rotaract Club of Ankara Bahçelievler, Dist. 2430) who helped me through my writing and making it possible.

Rana, Jaspal. “Why Did CRONUS Swallow His Children, and What Does It Signify?” GHD, GHD, 21 May 2019, www.greecehighdefinition.com/blog/2019/5/5/why-did-cronus-swallow-his-children-and-what-does-it-signify.

Written by GreekBoston.com in Greek Mythology. “How Did Zeus Become King of the Gods?” ICal, 24 Mar. 2016, www.greekboston.com/culture/mythology/zeus-becomes-king/.

“Zeus – the King of Gods from Mount Olymp.” Culture and Travel Portal to Europe, 19 Dec. 2013, www.alaturka.info/en/history/mythology/2085-zeus-the-king-of-gods.